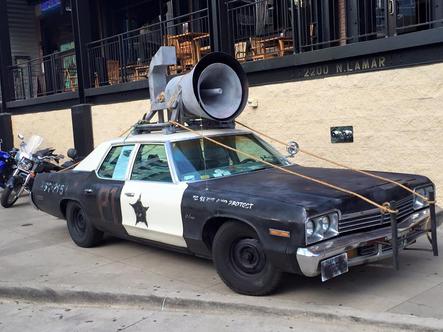 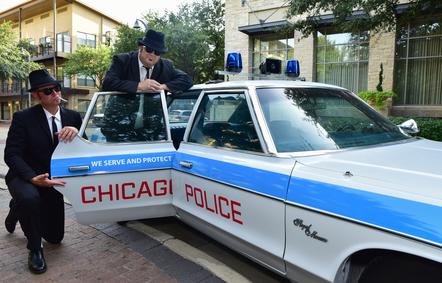 Our North Texas based Bluesmobile "replica" was purchased in February 2012, and spent the course of that year getting a complete "mechanical restoration and Hollywood movie makeover" to become the ONLY RECOGNIZED Bluesmobile for the state of Texas.

The Bluesmobile is one of the most iconic and recognizable cars in cinema history, and is truly "a major draw and attention getter" for any themed event.

Our car has been featured throughout North Texas at many festivals including Wildflower! in Richardson, Bedford Blues & BBQ, dozens of events at Live Nation owed properties and shows including House of Blues (Dallas & Houston), Verizon Theatre in Grand Prairie, AT &T Performing Arts Center in Dallas and many more.

Our car was selected to appear at WWE's WrestleMania 32 and WAS the car chosen nationwide to open game 3 of the 2016 World Series in Chicago at Wrigley Field for the Chicago Cubs. (Televised on Fox Sports globally)

We have worked closely or have appeared with many blues artists and legends including Tom Bones Malone, Blue Lou Marini and Steve Cropper all from the original Blues Brothers Band. In April 2015, we were selected to "tour Dallas" with Blues Brothers writer & director John Landis for the Dallas International Film Festival.

In 2016, we are the featured replica car on Wikipedia (under Bluesmobile)

Our car does travel across the United States and is now a featured car in the Chicago Illinois area.

In 2017, we obtained our second car for the ultimate Blues Brothers tribute - a 1975 Chicago Police car as seen in the film.